Some time back I went to see a prominent and well-respected man of God to discuss national issues and to ask him to pray for the nation.

When I got there I saw a good-looking young man with him. He treated the young man with such love, affection and kindness that I thought he was his son.

When I asked him he said that he was not his son but someone that he took into his Church and that he had more or less adopted.

He said that the young man’s whole family, including his parents, brothers and sisters had been wiped out all in one night by a group of cold-blooded butchers and that during the killing spree the young man himself had had his throat slit open and was left for dead.

He said that when he heard the story he was moved and decided to look for the Youngman, take him in and look after him even though he had never met him before and he did not know his family. Such gestures and acts of kindness are rare and consequently, I was deeply touched. 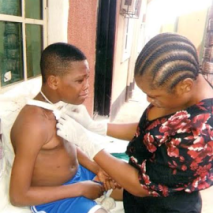 On my way out I saw the young man again and this time I looked at him more closely. I noticed that there was a deep and long scar across his throat which had clearly healed over a period of time but which was nevertheless still visible.

I also noticed that he looked confident, happy and relaxed despite his past travails and ordeal. As I left the Church and drove off in my car I thought to myself that this is a true man of God.

He took in and assisted the poor, the afflicted, the weak, the suffering and the vulnerable and he not only nurtured and strengthened them but he also gave them hope again.

That is surely what being a preacher, a pastor and a servant of God is all about: to care for the stranger, to bring healing to the sick, to heal the broken-hearted, to set the captives free and to be a good Samaritan.

This aspect of the glorious gospel of Our Lord and Saviour Jesus Christ, in my view, is even more important than all the prophecies and miracles.

It is only a truly strong man that is filled with the Spirit of God that goes out of his way to help those that are suffering, in danger or in need.

The weak, the irresponsible and the morally reprehensible never help anyone but themselves whilst the strong, the responsible and the profoundly good are more than happy to lend a helping hand to those that are less fortunate. That is the message of Christ: to love and to do unto others as we would do unto ourselves and that is why the Holy Bible says “thou shall know them by their fruits”.

It is a joy and a relief to know that we still have such men in the Body of Christ and on our shores.

The Pastors name is Prophet T.B. Joshua and his Church is called Synagogue Church of All Nations (SCOAN).

No matter what anyone may say or feel about this deeply committed and compassionate man the truth is as follows:

If we had more leaders and clerics that showed as much compassion and love for the poor, the helpless and the suffering as he does, Nigeria would be a much better place.

T.B. Joshua turned 55 years old on June 12th. Once again I wish him a happy birthday. He has done us proud.